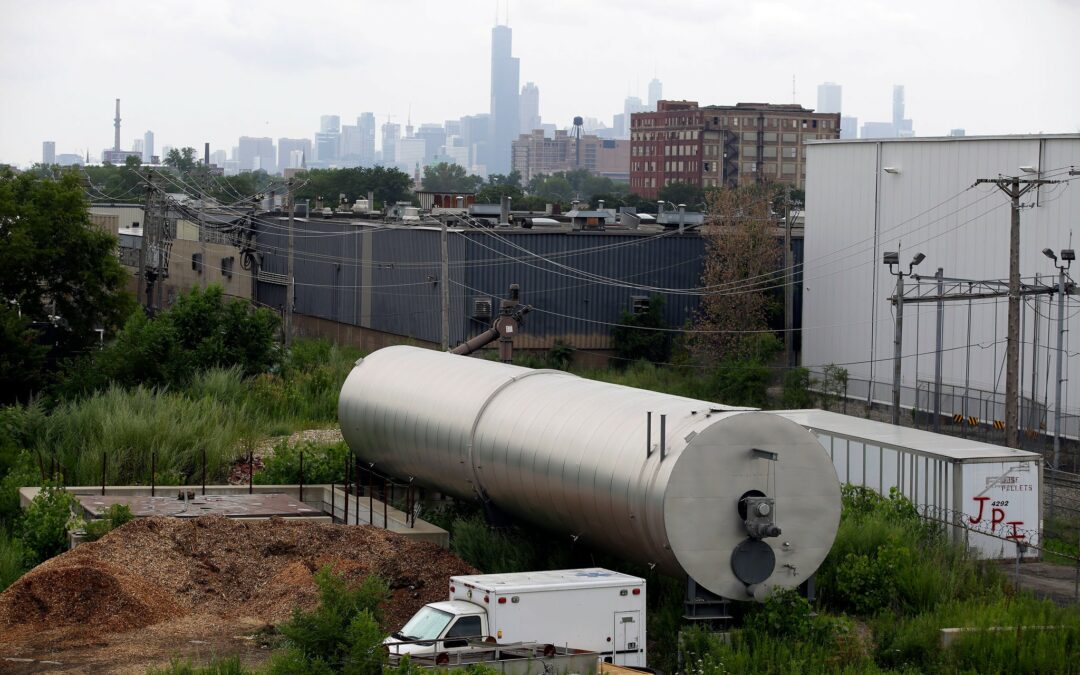 CHICAGO — A gigantic steel cylinder shines in the afternoon sun outside The Plant, a 93,500-square-foot “living food laboratory” here. To the untrained eye, it looks like a space rocket. But it’s not.

Bubbly Dynamics, the organization that nine years ago converted this former meatpacking facility into a hub for local food businesses, said that, once completed, this “mechanical stomach” would turn organic waste into compost, biogas and a nutrient-rich liquid in which to grow algae.

The digester is expected to help Bubbly Dynamics implement a circular economy, a model that could help fight climate change by feeding a rapidly growing urban population with food grown locally using organic methods, according to experts. This closed-loop system would create little to no waste because materials would be reused, shared, repaired and refurbished.

According to the Intergovernmental Panel on Climate Change, the global linear production system that relies on chemicals and fuel to produce and transport food over great distances is to blame for between 21 percent and 37 percent of the world’s greenhouse gas emissions. However, proponents of the circular model argue that cooperation among various groups in the food-production system can significantly reduce energy consumption and waste.Climate Solutions: A Special ReportClimate change was seen as a future threat. Now, it is a reality of the present.

The Plant, which is home to about 20 food businesses — including a kombucha brewery, a coffee roaster, a chocolate maker and a vegan-ice-cream maker — is among the global pioneers of the concept.

The indoor farms are irrigated with rainwater, and some of the energy is generated from solar panels. The spent grain from the Whiner Beer Company, the building’s largest tenant, is mixed with wood chips and horse manure to produce roughly 20,000 pounds of compost a month, and some of the carbon dioxide from the fermenting process is used to stimulate the growth of plants and algae.

The wastewater from Just Ice, an artisanal ice company in the basement, is channeled to a wetland in the lobby that has a vertical garden, or living wall, fishes and turtles.

“At its heart, The Plant is primarily a tool to fight climate change,” said John Edel, founder and director of Bubbly Dynamics. By reusing organic waste instead of letting it rot in a landfill, this facility keeps methane, a powerful greenhouse gas, away from the atmosphere.

“It has many other benefits to pass around, like providing economies of scale to small businesses so that they can compete with larger ones,” he said. “If the money stays local that helps everybody.”

Some of the collaborations that have allowed The Plant’s low environmental footprint have been encouraged by Plant Chicago, a nonprofit that promotes circular economy practices.

“It’s about collective action, that’s the next frontier. We need to get the Chicago food community to work collectively toward shared goals,” said Jonathan Pereira, executive director of Plant Chicago.

But The Plant, a gigantic food laboratory, is also about science and technological innovation. Researchers at the mycology lab are trying to grow mushrooms in the spent grain from the microbrewery, and Backyard Fresh Farms is developing robots controlled by artificial intelligence to tend to its plants.

Back of the Yards Algae Sciences wants to use algae to produce protein-rich food as an alternative to meat.

In many ways, meat production and climate change are entwined. Worldwide, livestock accounts for from 14.5 percent to 18 percent of human-induced greenhouse gas emissions and, each year, the amount of forested land that is cleared — in part to create pasture land for cattle — releases emissions equivalent to driving 600 million cars.

But Back of the Yards Algae Sciences, The Plant’s newest tenant, said that algae could be the bedrock of a sustainable, largely plant-based food industry.

“I mean, what really excites me in this building is that it was operating for almost a hundred years,” Leonard Lerer, founder of Back of the Yards Algae Sciences, said. “The meat of hundreds of millions of pigs was probably processed in here. And soon we will be able to make a burger that is 100 percent algae-based and cruelty-free.”

And urban farming is growing in places like New York, Paris, Shanghai, Singapore and Tel Aviv, for good reason.

A 2018 study suggested that urban farming could ameliorate some environmental problems in cities by increasing vegetation cover, removing atmospheric carbon dioxide and offering a habitat for bees and other pollinators. It could also help increase food security and reduce food waste, said Matei Georgescu, one of the study’s authors and an associate professor of geographical sciences and urban planning at Arizona State University.

“Because society largely depends on food grown elsewhere, the ‘out of sight out of mind’ mentality has led to nonsensical quantities of food waste,” he said. “Reconnecting people to the food they eat is likely to lead to decreased waste.”

Take Lufa Farms in Montreal, for instance. Since it opened a commercial rooftop farm in 2011, it has been doubling the amount of food it produces every two years. It now grows about 50 varieties of veggies in three hydroponic rooftop farms that generate “virtually no waste.”

That’s in part because it only harvests by order and sells products only in Montreal. In addition, Lufa saves energy by warming its farms with the excess heat emanating from the buildings below, captures rainwater for irrigation, packages products in compostable plastic and relies on 25 electric cars to deliver some of the 17,000 baskets it sells every week via its online farmers market.

Where Lufa got “very nerdy,” said co-founder Lauren Rathmell, was with so-called biocontrols, which use living organisms to fight pests.

“We were really naïve to think that there wouldn’t be that many insects in this area of the city. I don’t know what we were thinking, but we’ve had everything you could probably have in a farm or a garden, and learned to deal with it, incredibly effectively, using not a single synthetic pesticide,” said Ms. Rathmell, a trained biochemist.

Lufa turned its greenhouses into high-tech living ecosystems that host dozens of insect species including “good bugs” like parasitic wasps, ladybugs and predatory mites to keep pests under control.

As a result, Ms. Rathmell said, Lufa demonstrated a commercially viable way to supply urbanites with greens grown sustainably in rooftop greenhouses — a system that is particularly suitable for cold-weather cities with short growing seasons.

Lufa estimates that by converting 19 rooftops of average-sized shopping centers it would be able to supply all of Montreal — which has a population of about 1.8 million — with sustainably grown veggies. While Lufa has considered spreading to the Northeast United States, it, like other companies in the circular economy sphere, says it believes that “slow growth” is the best way to be faithful to its principles.

“What we’re trying to build is something that can last. Something that can have an impact on access to quality, fresh produce in cities, where more and more people are. Montreal is the test bed but we see this as a multigenerational endeavor,” Ms. Rathmell said.

Produce grown using regenerative farming practices can often be out of reach to low-income consumers. But some argue that circular economy practices can be used to actually democratize access to healthy food.

That’s the tenet of Saladorama, which works with six farms to produce and distribute healthy meals to low-income communities in three Brazilian cities.

“The main challenge was this social construct that healthy food is only for the elites,” Mr. Henrique said through an interpreter.

Can the circular economy model that is being pioneered by these organizations help fight climate change?

According to the Ellen MacArthur Foundation, a British charity that promotes the circular economy, a large-scale circular food economy would help reduce greenhouse gas emissions by 4.3 billion metric tons of carbon dioxide a year, the equivalent of taking one billion cars off the road.

The foundation is working with six major food companies, including Nestlé and Danone, and with three cities — London, New York and São Paulo, Brazil — to lay the foundations of a “holistically healthy food system,” said Emma Chow, who leads the foundation’s Cities and Circular Economy for Food initiative.

“Our goal is that every meal and every piece of food, that the very act of eating, help solve rather than contribute to climate change and biodiversity loss,” she said. Correction: Sept. 23, 2019