To Make This Tofu, Start by Burning Toxic Plastic from America, collected for recycling, that is shipped to Indonesia.

Some is burned as fuel by tofu makers, producing deadly chemicals and contaminating food. 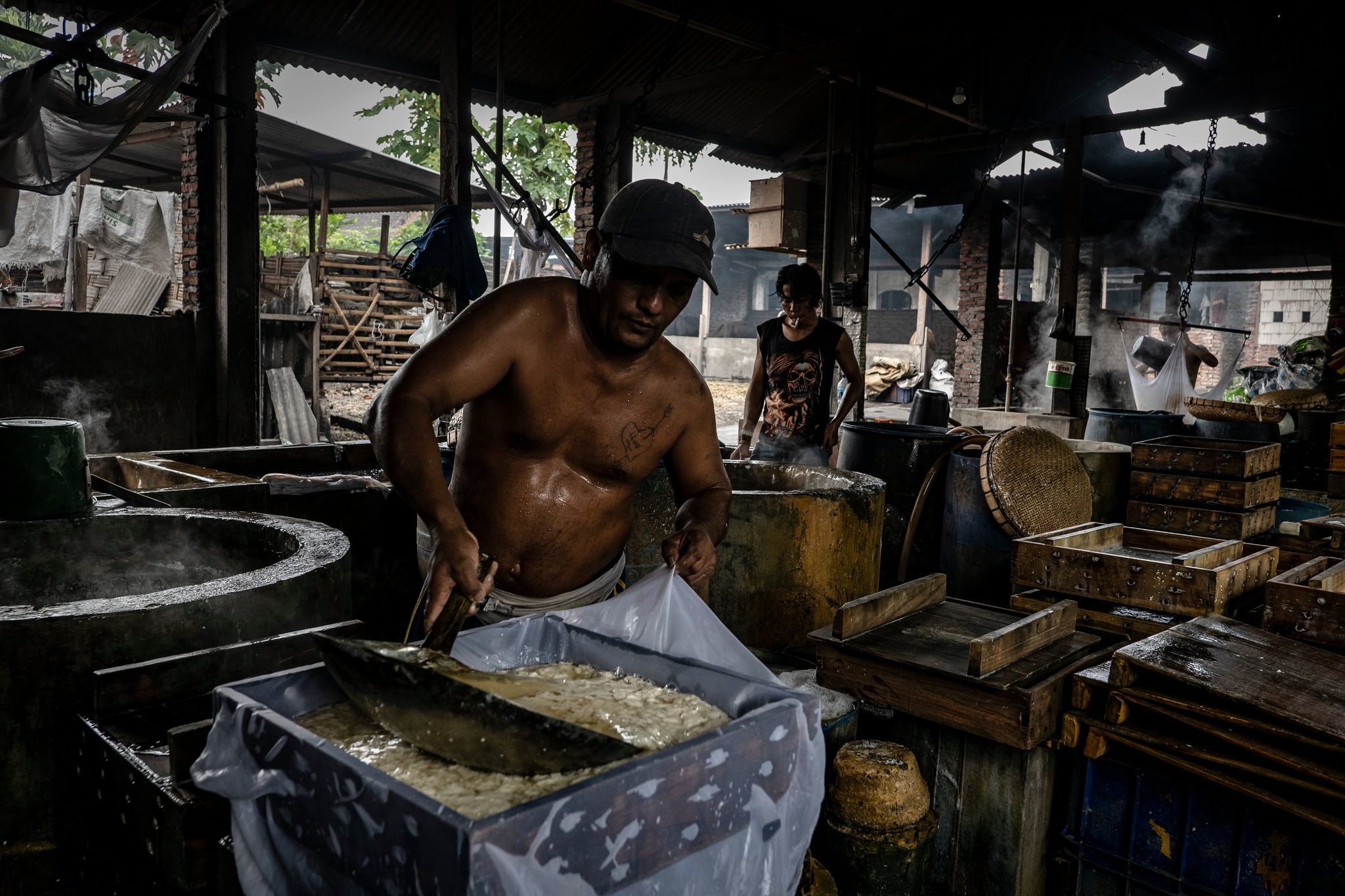 A commercial tofu kitchen in Tropodo, Indonesia. The tofu is processed in boilers fueled by burning plastic. Credit…Ulet Ifansasti for The New York Times

TROPODO, Indonesia — Black smoke billows from smokestacks towering above the village. The smell of burning plastic fills the air. Patches of black ash cover the ground. It’s another day of making tofu.

More than 30 commercial kitchens in Tropodo, a village on the eastern side of Indonesia’s main island, Java, fuel their tofu production by burning a mix of paper and plastic waste, some of it shipped from the United States after Americans dumped it in their recycling bins.

The backyard kitchens produce much of the area’s tofu, an inexpensive and high-protein food made from soy that is an important part of the local diet. But the smoke and ash produced by the burning plastic has far-reaching and toxic consequences.

Testing of eggs laid by chickens in Tropodo, a village of 5,000 people, found high levels of several hazardous chemicals including dioxin — a pollutant known to cause cancer, birth defects and Parkinson’s disease — according to a report released this week by an alliance of Indonesian and international environmental groups.

The dioxin found in Tropodo is the end product in a chain of malfeasance, carelessness and governmental neglect.

“They start the burning early in the morning and go until evening,” said Karnawi, 84, who lives near seven of the plastic-burning commercial kitchens. “It happens every day and the smoke is always in the air. For me, it’s difficult to breathe.” Like many Indonesians, Mr. Karnawi uses only one name. 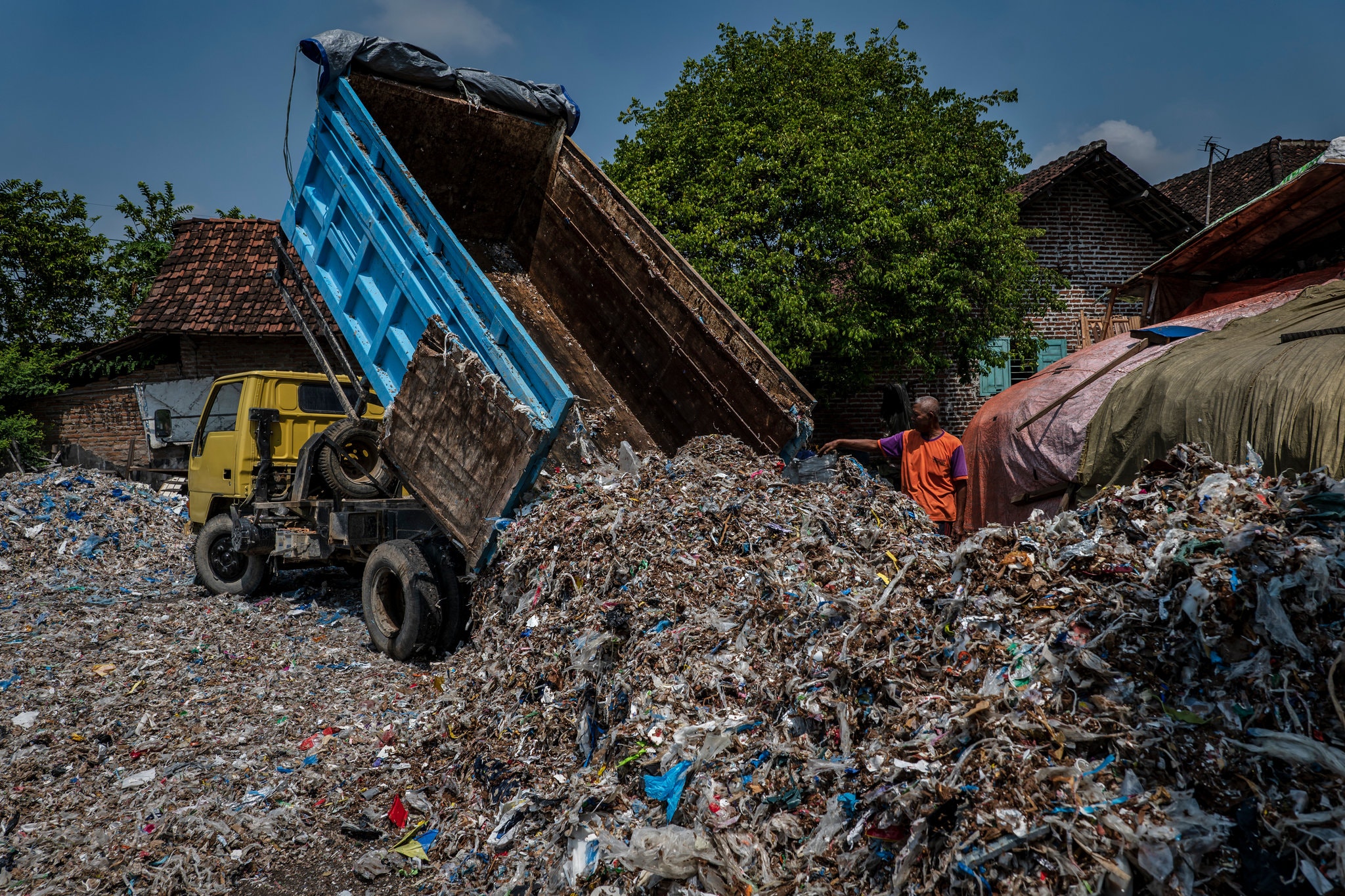 A truck dumps imported plastic waste in Bangun village, some of which is destined for the tofu kitchens. Credit…Ulet Ifansasti for The New York Times

An egg laid by one of Mr. Karnawi’s chickens had one of the highest levels of dioxin ever recorded in Asia, the report found.

The levels of dioxin found in that egg were second only to eggs collected near Bien Hoa, Vietnam, the former United States air base that was a Vietnam War staging area for the defoliant Agent Orange, which contains dioxin. The United States recently began a 10-year, $390 million cleanup at Bien Hoa, which remains heavily contaminated nearly five decades after the war ended.

An adult who eats just one egg like the one taken from Mr. Karnawi’s henhouse would exceed the United States daily safety threshold by nearly 25-fold and the stricter European Food Safety Authority standard by 70-fold.

Eggs are commonly used for testing contamination because chickens effectively sample the soil as they forage and toxins accumulate in their eggs.

“These stark findings illustrate the dangers of plastics for human health and should move policymakers to ban plastic waste combustion, address environmental contamination, and rigorously control imports,” said Lee Bell, an adviser to the International Pollutants Elimination Network and a co-author of the report.

The study was conducted by four environmental groups: Ecoton and the Nexus3 Foundation, based in Indonesia; Arnika, based in Prague; and the International Pollutants Elimination Network or IPEN, a global network dedicated to eliminating toxic pollutants.

The toxins found in Tropodo’s soil begin with Westerners believing they are doing a good thing for the environment — sorting their waste for recycling. Much of that waste is sent abroad, including to Indonesia, where it is combined with local waste for processing. 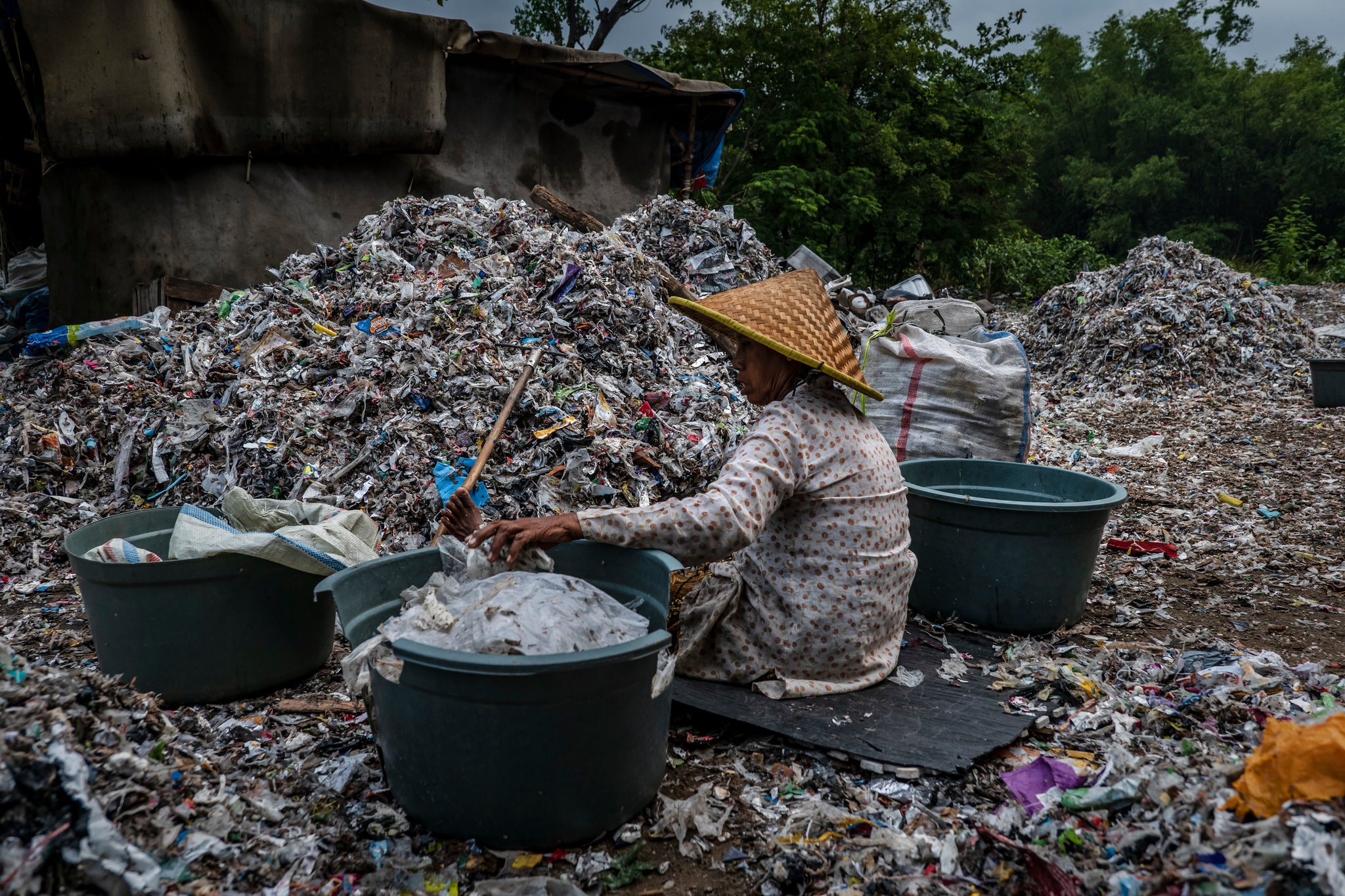 Plastic from around the world, including the United States, winds up at a dump at Bangun village, where locals sort it. Credit…Ulet Ifansasti for The New York Times 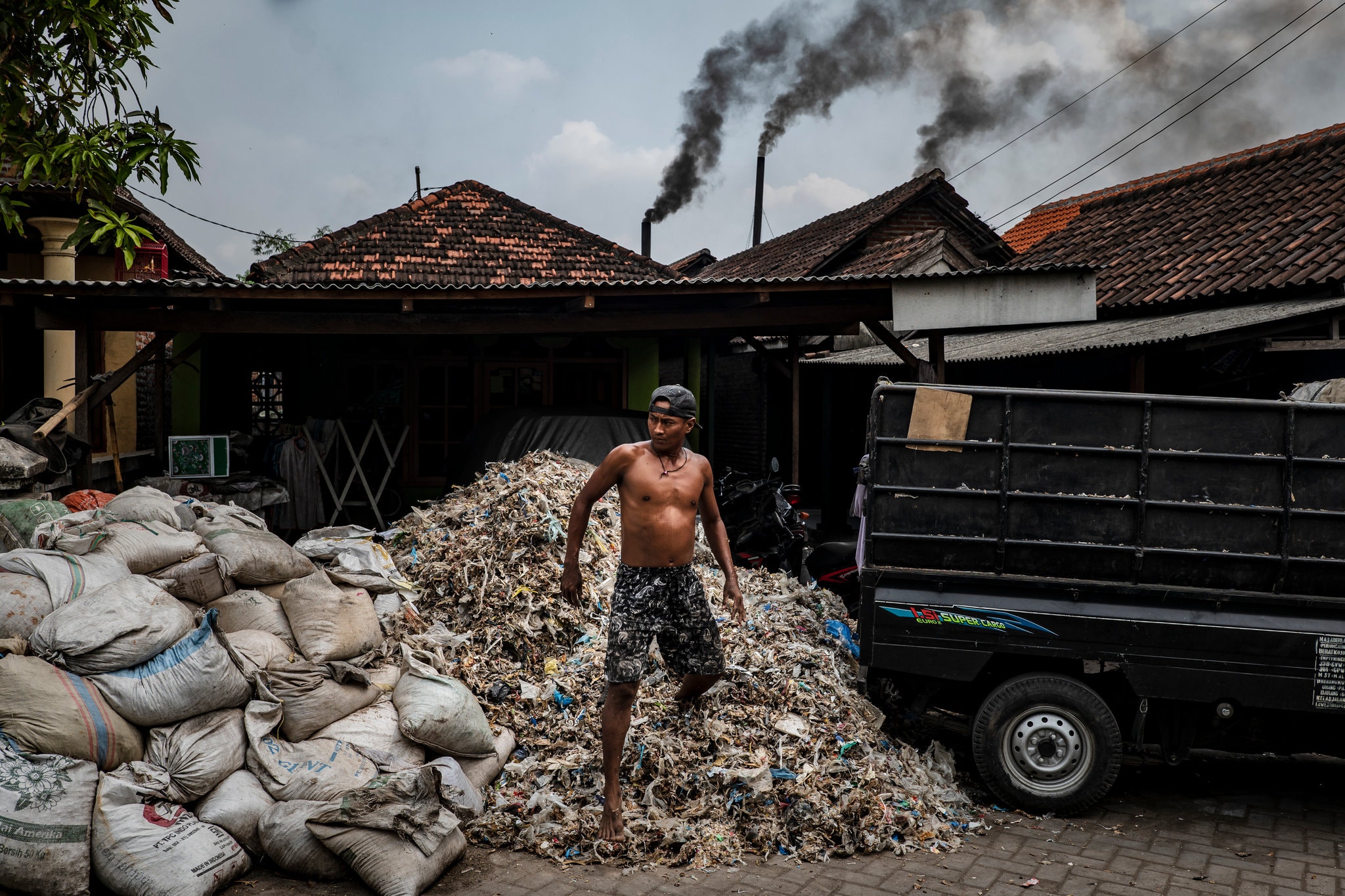 Plastic arrives at a tofu plant in Tropodo village. When the plastic is burned it creates plumes of black smoke. Credit…Ulet Ifansasti for The New York Times 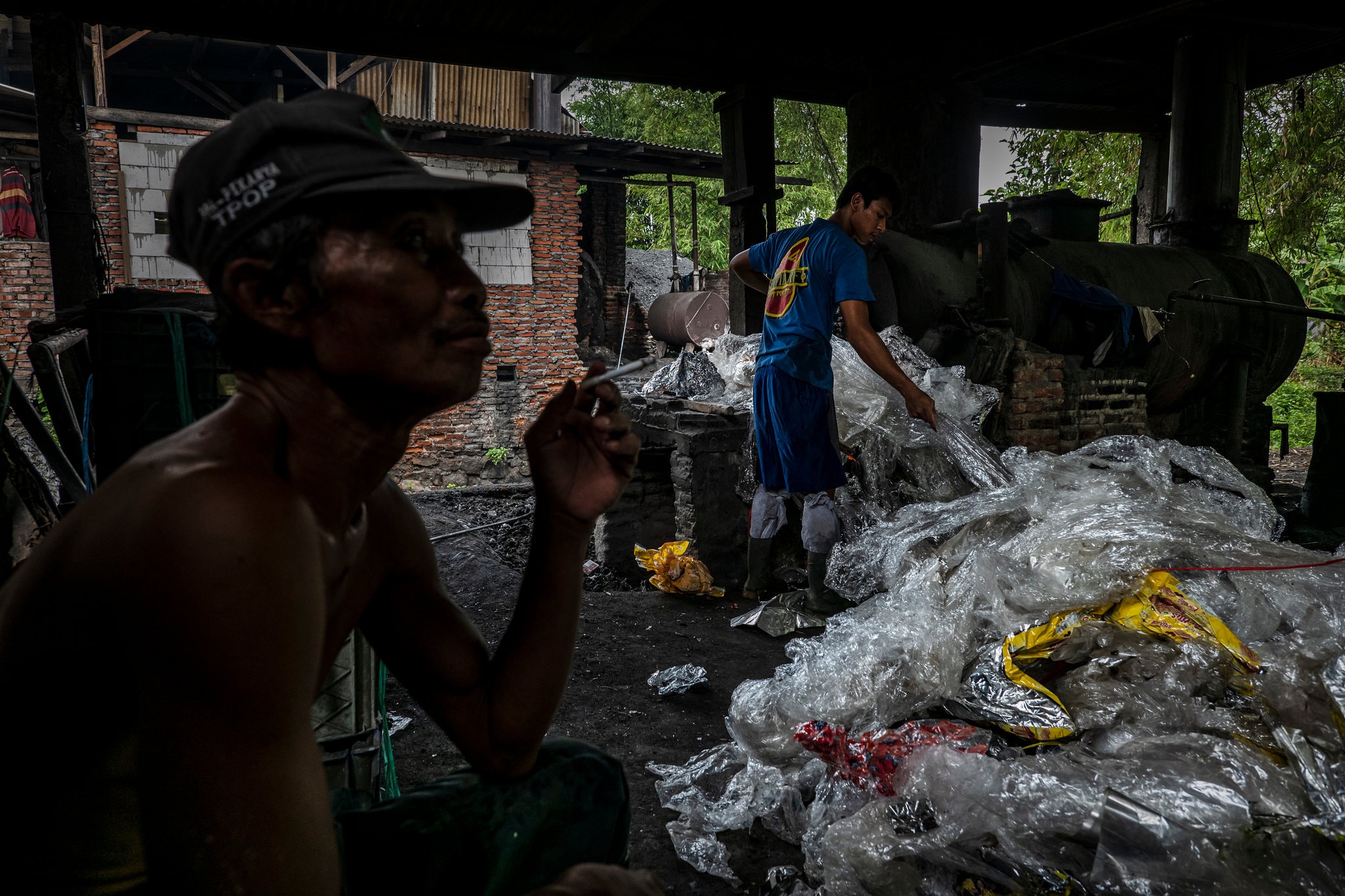 The ground in Tropodo is covered in plastic ash. Credit…Ulet Ifansasti for The New York Times 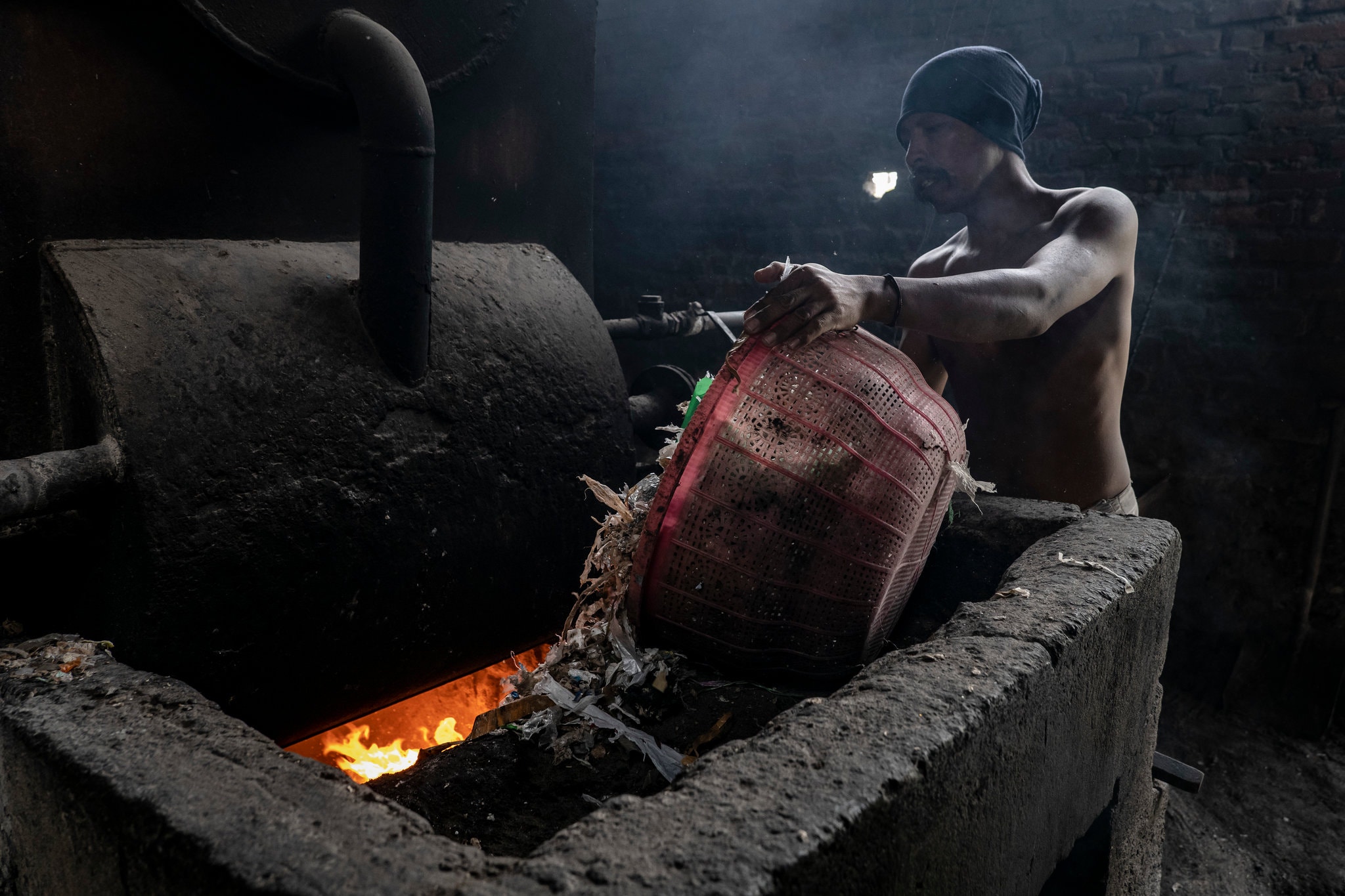 A worker adds plastic to a furnace.Credit…Ulet Ifansasti for The New York Times

Some unscrupulous foreign waste handlers dump unwanted plastic on the developing world by including as much as 50 percent plastic in their supposed paper shipments, Ms. Yuyun said. Local companies profit by accepting the shipments.

Much of the plastic is unwanted, low-grade material and Indonesia has no good way to dispose of it.

After removing the best materials for recycling, most companies send their remaining waste to Bangun, a village known for its trash pickers who hunt for items of value and material worth recycling.

In Bangun, piles of trash, some more than 15 feet high, fill every vacant bit of land. About 2,400 people live in the village and almost every family is involved in the waste business.

The trash pickers say they can tell that some shipments have come from the United States because of the writing on items they sort. Further indicating the origin of the waste, the pickers say they sometimes find accidentally discarded American dollars and broken liquor bottles with distinctively American labels, like Jack Daniels.

The final stop for the least wanted trash is Tropodo and its tofu makers.

Every day, trucks carry leftover scraps of paper and plastic 20 miles by road from Bangun to Tropodo and leave their loads outside the tofu kitchens.

“People need it as fuel for the tofu factories,” said a truck driver, Fadil, 38, as he dumped his load on a village street. He said he had been delivering paper and plastic waste to the village’s tofu makers for 20 years.

The open burning of trash — including plastic — is widespread throughout Indonesia. The practice is illegal but the law is seldom enforced. 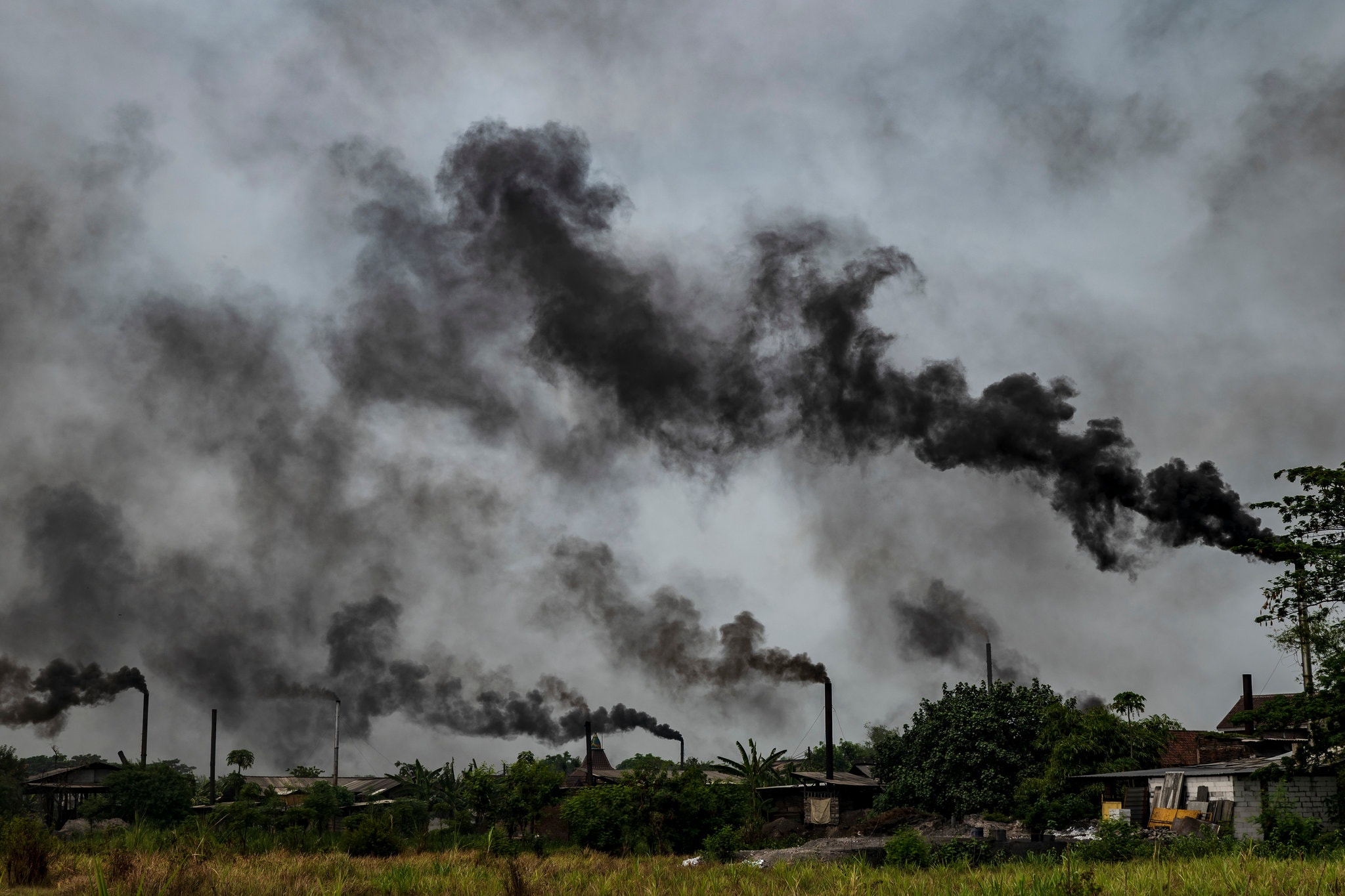 The burning of plastic pollutes the air and food. It creates dioxin and other toxic chemicals. Credit…Ulet Ifansasti for The New York Times

Environmental activists say Indonesia’s president, Joko Widodo, has neglected health concerns in pursuit of economic development and have urged him to address toxic contamination, including air pollution and mercury contamination.

In July, the Environment Ministry’s director general for waste management, Rosa Vivien Ratnawati, visited Tropodo and acknowledged that the plastic burning was hazardous but made no attempt to halt it.

She told reporters that she would investigate how the toxic smoke could be controlled.

“If the plastic is used as fuel it is not a problem but the pollution should be managed,” she said.

Since then, the government has taken no action.

Contacted last week by The New York Times, Ms. Ratnawati declined to discuss the issue and referred questions to the director general for environmental pollution, Karliansyah. He did not respond to inquiries from The Times.

Many of Tropodo’s residents say they detest the plastic burning but are powerless to stop it.

The tofu makers — a major employer in Tropodo — switched to burning plastic from wood many years ago.

The kitchens operate every day, and when there is little wind the acrid smoke hangs over the village like a poisonous fog.

Nanang Zainuddin, 37, runs a small kitchen around the corner from Mr. Karanawi’s henhouse. He says he burns plastic because it is cheaper, sometimes as little as a tenth of the cost of burning wood.

The process of making tofu starts with soaking and grinding soybeans, placing them in a concrete tub and injecting steam from a boiler that is fueled by burning plastic.

One worker tends the boiler and stuffs plastic into the fire while others steam the soybeans and skim off the pulp.

Mr. Nanang said that he disposes of the plastic ash by burying some and spreading more on the ground to create a level surface. He also gives some to neighbors so they can spread it over the soil around their homes.

“We are now standing on the ashes,” he said as chickens and chicks scratched for food near his feet.

“Dioxin can come from anywhere,” he added, “but if the government would like to resolve this, they are welcome.”

The former mayor of Tropodo, Ismail, 50, a tofu producer himself, banned the use of plastic as fuel in 2014. But the prohibition lasted only a few months before the burning resumed.

His edict has been ignored ever since.

“There are many tofu makers here and most of them do not care,” said Mr. Ismail, who uses mostly wood and some plastic as his fuel. “The tofu makers only count the profit, profit, profit. They don’t count the disadvantages created by this business.”