The Insect Apocalypse is Here

A vital, invisible living system is disappearing and when it’s gone there will be no coming back. 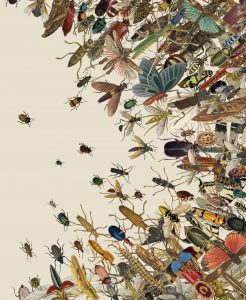 Insects are vital to the cycle of decomposition and nutrient cycling, healthy soil function and a component of a balanced ecosystem.

Current worldwide loss of biodiversity is popularly known as the sixth extinction: the sixth time in world history that a large number of species have disappeared in unusually rapid succession, caused not by asteroids or an ice age but by us, humans.

When entomologists began noticing and investigating insect declines, they mourned the absence of solid information from the past in which to measure the present.
If entomologists lacked data, what they did have were serious, worrying clues.
What is being lost is not just the diversity part of biodiversity, but the bio part: life in sheer quantity.

Insects by eating and being eaten, turn plants into protein and power the growth of all the uncountable species — including freshwater fish and a majority of birds — that rely on them for food, not to mention all the creatures that eat those creatures.

What impact will the decline of wild berries have on a grizzly bear diet because bees didn’t pollinate this nutrient resource?
Will wild baby salmon that rely on flies translate to a decline in mature salmon due to a protein resources unavailability?

Wildlife is dying out due to habitat destruction, overhunting, toxic pollution, pesticides, herbicides, invasion by alien species and climate change.
The extinction of seed dispersal, predation and pollination will increase a disordered an unbalanced ecosystem that will affect all species on the planet.

The time to act is very short.

Chemical pesticides are widely used in agricultural systems, yet reliance on chemicals is no longer a feasible approach to pest control for the following reasons:
Pest Resistance
Creating a Secondary Pest Problem

Even chemicals which are effective against pests often kill or interfere with beneficial insects and microorganisms.
The situation created then allows an insect (not the usual pest, but another insect taking advantage of the available food) to rapidly increase in number since no predators are in place to prevent the population explosion.